Land ho! We are nearing port (the finish line)! It has been a rowdy week with getting our butts into gear, tasks completed, challenges overcome, and making some tough calls! The Captain’s Logs are a pride and joy of us, so let us take you on a journey once again!

We got some fun stuff completed this week, such the majority of the props and the models for these! Add the first draft of our storyboard and we golden, son! However, the biggest thing is… WE HAVE OUR FIRST TEST PAGE! We’ve been building more and more tools, such as a timeline tool and refining existing ones like the baking and line drawing tools. We’ve done all of that this week to make the test page work as swimmingly as possible. Go check out the video of it here OR download the APK here if you own a Quest (A Quest 2 is preferable, but we’re hard at work to improve it for the Quest 1). You’ll be surprised!

Craig returned with some amazing words of wisdom and questions for us this week! The mentorship with him centered all around… What is the future of Icebreakers? How will the characters shape going forward? What are their backstories? Can you already show the audience a bit? Can you already worldbuild through environment and shot design? It was a question that made us ponder a bit. We all definitely see a future in Icebreakers, but are we ready yet? Maybe we’ll never be ….until we go for it! There have been enough arguments between us, but all of them essentially came from a place of love for the project. We already have a good picture of the world and its inhabitants. It's just a question when we will breathe a chilly wind of life into them!

With Scot Stafford, and the day after with Tetsuya Mizuguchi, we had an interesting combination of talks and discussions since they both centered around music to an extent. With Scot we looked at how to compose our music in a long form and punctuate it with stingers. As we progressed, Scot suggested again that we could look into sound design, or at least ambient sound design to give the audience a sense of space. This possibly even done through music gave us so many ideas.

Mizu followed up the next day with a slightly different approach in music, in that we could compose it in such a way that it guides the audience and appeal to their wow-factor by introducing stark changes that force the audience to pay attention to what is happening. It’s something that is super useful since we don’t want the audience to lose interest! We ended with him saying, as this was our last meeting with him, that what we’re doing could be the future of viewing stories in VR. It’s… A great honor and responsibility. We are not sure if we are able to carry such a responsibility, but this is also something we believe in, so bet we do our damndest to try and do so.

To end on somewhat of a sour note, we have decided to postpone voice acting for Icebreakers to instead focus on polishing the timing and looks, and not spread ourselves too thin. It has been a discussion we didn’t take lightly and we still fought tooth and nail to find a way to put it in within the timeframe, but alas. However! We have committed to adding voice acting as soon as the STL has ended! We run through the script one more time, do minor tweaks, spruce it all up nice and shiny, and make something even more exciting! To answer again what the future of Icebreakers is: An adventure that is NOT going to end in 3 weeks time! ….Oh shoot, we got three weeks left!! Aaahhh! 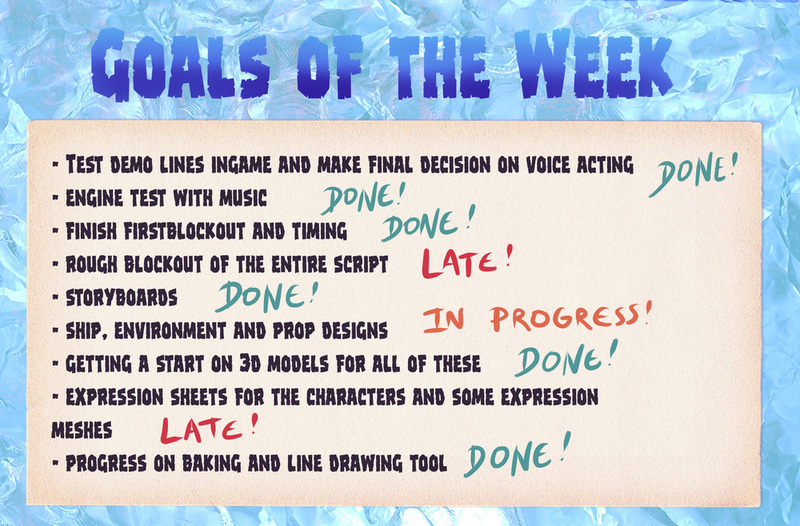 Before we go! Recommendations!
This week’s suggestion is the obscure (and terribly underrated, but still hilarious) Hanna-Barbera show, Pirates of Dark Water! It is their 30th anniversary this week!

The intro is a great summary of what the show is about! The cheese is real!:
The Pirates of Dark Water - Intro / Outro Theme Music

And some of Alex’s personal redesigns because god knows this show deserves a reboot (Get on it Netflix!): https://www.artstation.com/artwork/B1orRr
Come geek out with her about Dark Water!

And if you have watched Pirates of Dark Water and want more of that goodness, did you know there is a podcast?